You Better Be There to Buy … or Not; Rescue Made in Green Briar Hell 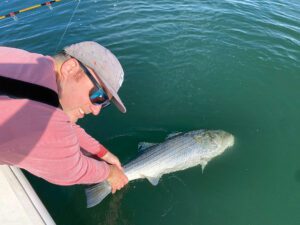 Win Taylor releases a large bass he caught while fishing on Oct.31. (Photos by Jack Reynolds) 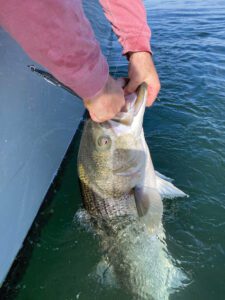 Let’s start off in Weirdnessville this week by focusing on that quick-change billboard on Route 72 in Manahawkin near the Holiday Inn. It’s digitized and computerized, brightly cycling through assorted ads and messages. One display changed my day – and maybe my life. It’s a state public service warning-of-sorts that reads, “If you can’t buy it, don’t try it.”

My initial reaction was a default “Say what!?” It was upon my third or fourth think-over that I began registering the say-whatness of this edifying slogan, which I sensed was roundaboutly aimed at me, as in billboard-afied words to live by.

Sure, I fully realize kids under 18 years of age are the first-and-foremost target of the slogan. It’s a complex iteration of the ineffectively sophomoric “Just say ‘No’” – a slogan even I had a hard time punctuating properly.

Conjuring up a new motto for today’s upstart kids has apparently gotten kinda hazy with the legalization of marijuana, along with the ongoing need to also cast simultaneous aspersion on underage alcohol, tobacco and – dare I say it? – firearms. Yep, this slogan quaintly covers them all, artfully playing a head game to reach the hopefully savvier kids of today, who are faced with more legally achievable temptations than ever before, always age permitting.

Public service-wise, warnings like this are no longer Big Bird territory. Even the former threats of sizzling fried-egg brains are giving way to a greater emphasis on legal consequences. Screw the brain damage, kid, you’ve got juvie stints to worry about. Priors suck.

By the by, this is not a criticism of the slogan. In fact, I’m giving significant street cred to both the message and the medium, ranging from billboards to social media saturation. And its essence might very well penetrate to the heart and soul of New Jersey’s widespread Middle America class of kids – and their fears of getting popped. How it might fly on the mean streets of Camden or Newark is anyone’s guess.

Now to the me side of things – and an odd runoff impact from this far-reaching catchphrase. After reading the billboard, the very first self-based aspect that jumped to mind had me window shopping at my favorite tackle shop and believably asking to see a $1,300 Shimano Stella SW C Spinning Reel. You already see where this is going, right? Voice “Jay, if you can’t buy it, don’t try it.” Sorry, you can put this back, sir.

So, later, I’m driving home and pass a Lexus dealership with a sign saying, “Come in for a spin.” Screw you, billboard! As I do a Jersey slide across three lanes of traffic to pull in.

DON’T GO THERE: I have a minimal but interesting rescue tale to pass on. It occurred in a heavily wooded area down Bass River way. I was out doing my deep woods delving about when I heard a distant horn beep. I knew it was a stationary beep, which has a certain come-hither sound to it. I figured it might be someone calling back a dog, a common pet-beckoning practice.

Then, not long afterward, another beep came, soon followed by another. It was getting odd in a flashback way. My late treasure hunting buddy, Eddie, after becoming too chubby to frolic with me in the Pines, would come across my parked truck and commence to systemically beep his horn, forcing me to angrily backtrack all the way to my truck – simply to sit and shoot the bull with him.

But the beeps I was now picking up were coming from dead opposite of where I had parked. My interest piqued, I moved toward the beepage. Within a few minutes of trudging the boonies, I heard a shrubbery muffled “Hello.” It was too distant to be someone greeting me. Instead, it was a question-class “Hello?,” as in a Pink Floyd “Hello … is there anybody out there?”

I moved toward the voice, hesitant to respond, knowing it was being issued from an area thick as an undergrowth brick – no-man’s territory. I was momentarily concerned that deer might have finally perfected a “Hello” vocalization, meant to sucker me in, just to run off a short distance and gigglingly loose another “Hello.” I worry about some very weird s— when in the woods.

After a minute of traipsing through increasingly thick underbrush, I began picking up traces of people speaking. Stopping, I let out a significantly loud “Yo!” It seemed like a good thing to shout. And it elicited a rapid and decidedly excited “Hello!” I returned a more subdued “Yo” as I further homed in on the hello-er.

After we “Yo”-ed and “Hello”-ed a couple more times, I spied a man and two women, all middle-aged and looking every bit the part of weekend L.L. Bean hikers.

As I busted toward them through painfully stickered underbrush, they all began overdramatically waving their arms, looking more like folks signaling overhead help from a deserted island. One of the women, looking right at me, even threw in a late-breaking “Over here!”

I’m thinking, “You do realize I’m looking right at you, ma’am? ” Hey, I was getting a snark on as stickers ripped at me.

A quick onsite assessment indicated the trio had gotten themselves almost absurdly off the beaten path. In fact, they were off anything that even vaguely resembled a path, coming to a standstill amid relentless green briars. What’s more, they had also managed to stumble on the only marshy area for miles. Puddles had formed around their boots as they sank into sphagnum moss.

Then came a proverbial moment of awkward silence as the three watched me quizzically looking them up and down and up again. I displayed my finest “What in bloody hell!?” look. On their parts, they offered half-assed Stan Laurel smiles. You gotta be really old to know what that means.

The man was the first to speak, weakly chuckling, “We’re kinda stuck.”

OK, so maybe I milked the moment by quietly standing there for another minute – holding a backwoodsman head tilt, knowing they were squirming a bit inside out of embarrassment and possibly starting to nervously wonder who this man was who somehow arose from amid the shrubbery. ’Tweren’t nothing about none of this in any hiking handbook.

Since I was starting to sink into the sphagnum, I pulled out my trusty root clippers and began freeing them from the caressing vines and stickers. Once they were cleared, it was no small effort to knee through the undergrowth to the nearest path, a solid and nasty 50 yards off. To their credit, they kept up very nicely.

Once out to the path, more conventional greetings took place, including something about their hailing from the Cherry Hill area and one of the ladies having a birthday. The hike was a chance for her to try out, yep, L.L. Bean gifts. But things quickly took a turn to the far-more-interesting for me.

Remember those horn beeps? It was related to them. They had some sort of app that could activate the horn to their vehicle from anywhere, even outer space. Having taken path to path to path, the trio had become somewhat disoriented, though far from lost. Experimentally, they turned toward the horn app. It worked perfectly, ostensibly, right before things went south and sour when they decided to beeline to the sound of the horn. Yep, they went headlong into headlongless terrain. And it was truly impassable. Even machetes would have said, “We’re outta here!” A hackneyed expression came into fully pertinent glory: You can’t get there from here.

As I was guiding them toward the roadway where I believed their vehicle was parked, we bonded, as I’m highly inclined to do when meeting people in the outback. I also gave them directions to this column, where I’ll herein mention it was very nice meeting all y’all – and thanks to the doctor in the group who advised me on ways to help my aching shoulder.

I came away realizing the likelihood that other outdoorsers might misread their GPS location apps/devices. Upon researching apps, I see most of them are accompanied by very decent topographical-map looks showing even vague trails. The trick is to nix any beeline urge in hopes of quickly getting back to Point A by crossing into no-man’s land.

RUNDOWN: I’m fishing for any compliments to bestow upon this fall’s surfcasting. Talk about a tough go. It has gotten to that point where objectivity demands I report on the silence of the suds.

It’s not like beachline waters are a dead zone, especially if you consider skates and dogfish as living fishable creatures. And on the majestic side of things, there is a decent spattering of stripers, with some throwback trophy bass in the mix. Those big bass are always a fun take, worthy of a prominent place on the selfie shelf. As to boat bassers, you continue to rock the rockfish. More and more report of jumbo cows well over 50 pounds.

Back on shore, there’s no way to objectively ignore the lack of kingfish. Last year, these feisty swash-based gamefish were an anchor species for the LBI Surf Fishing Classic, a nine-week barometer of surf fishing. This year, they went autumnally AWOL, despite having made a decent showing throughout the summer.

It has almost been proven that kingfish numbers can vary with commercial shrimping pressure, as kingfish are bycaught by the tons. However, I’ve seen the heaviest shrimping years accompanied by outstanding kingfishing for anglers. For 2022, it’s a matter of wondering ahead to next year. That’s not what the Classic doctor ordered.

And onward to the unsightly matter of another year that we must sing the blues over having no blues. There has been just one entry into the Classic’s bluefish category. With the event’s drop in minimum enterable size, we thought for sure the category would light up. Dark bluefish days remain upon us.

Speaking of blues, there’s been an even deeper twist of the AWOL screws. Last month saw the Outer Banks of North Carolina absolutely overwashed by huge blues, with slammers over 20 pounds! The showing, replete with beach blitzes, was officially categorized as the heaviest bluefishing anyone had ever seen down there. How in bloody hell can that be!? Those NC waters are a stone’s throw away as the cormorant flies. In swimming terms, those blues could have reached here in under a day. They simply sought to forsake N.J.

Of significant biomass import, that NC showing fouls up some theories on a big picture disappearance of blues. In terms of our seeing a return of serious-grade blues, yet another case where we’ll have to wait another year.

I can sing tog praises, with over 20 blackfish reaching the Classic scales. We’re moving toward times when a slew of blackies can be kept, though such keeperage mainly applies to fishing well off the coast.