Vandals, Animals May Have Struck at Gardens 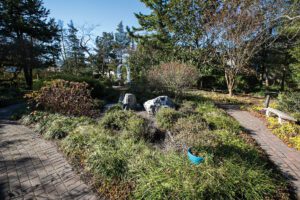 WHODUNIT?: Much to the dismay of LBI Garden Club volunteers, part of the Edith Duff Gwinn Gardens in Barnegat Light recently was found to be in a state of disarray. (Photo by Jack Reynolds)

The Garden Club of LBI is trying to solve a mystery that could be titled “What Happened at the Edith Duff Gwinn Gardens?”

Located on the grounds behind the Barnegat Light Museum, the gardens are regularly maintained by the group.

“Throughout the gardens there are lovely surprises of fountains, arbors, birdbaths, sculptures and benches,” wrote a group of volunteers in a joint statement. “To many delights, we also maintain a small fish pond with plants, fish, an occasional turtle or frog. Just as we winterize the garden after the fall, we also make sure the pond is secure. The plants and fish remain as they both go dormant. The fish in the pond are protected by all the plant material that they shelter in through the winter.”

But one of the volunteers said earlier in the month, someone pulled out all of the established plants, several that were potted and many that were rooted, in the pond.

“When this was discovered, approximately 12 to 15 fish were still in the pond but now with no protection,” the group stated. “There was a small plastic child’s play toy and fish net left as well.”

When volunteers returned several days later, they found that all the fish were missing.

“We hope that it is an uninformed action by someone who thought that they were preserving the fish or an innocent child’s prank, but just as no one would steal a birdbath or bench or dig up any of the flowers, the pond, the plants and fish belong to the garden club and should not be tampered with in any way without consulting the museum or garden club,” the volunteers wrote.

Volunteer Norma Parfitt, who looks after the pond, said some of the fish were later found alive and well.

“They hide around this time of the year, so it may be easy to miss some,” she said. “But some are still missing.”

Could any wildlife have helped themselves to the fish? That’s possible, according to Robert Schoelkopf, founding director of the Marine Mammal Standing Center in Brigantine.

“Eagles and ospreys certainly prey on fish,” he said.

Another possibility could be otters, which he said are nocturnal animals seen at the Jersey Shore mostly during the winter months.

Parfitt said that if anyone has any idea what may have happened, they can contact the club at thegardencluboflbi.com website.

“The many people who visit the garden, sometimes daily, will be saddened by this,” she said. “We put a lot of time into maintaining it.”