Cartoons and Newsreels, Too 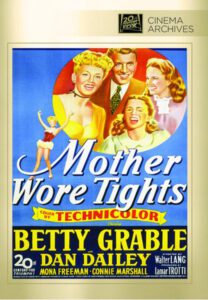 Tuckerton’s Episcopal Church of the Holy Spirit, located at 222 East Main Street, is observing its 75th anniversary this year. It’s celebrating its diamond jubilee by reverting back to the year 1947.

The church will be hosting its monthly free community dinner on Wednesday, Nov. 30 at 6 p.m. But the evening will continue with the screening of a 1947 film, “My Mother Wore Tights.”

It’s a musical starring Betty Grable, best known as the most popular pin-up girl of World War II, and the hoofer Dan Dailey. It was the highest grossing film of Grable’s career up to that point and was 20th Century Fox’s most successful film that year. It earned three Academy Award nominations, and Alfred Newman won the Oscar for Best Musical Score.

You may not know of Alfred Newman, but over the course of more than four decades he composed the scores for over 200 movies, winning nine Tony Awards. Younger people, though, may know of his nephew, a guy called Randy Newman.

The free movie night will also feature cartoons and newsreels from 1947.  —R.M.