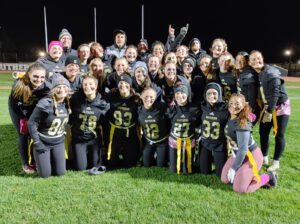 OUT WITH A BANG: The Southern Regional seniors gather to celebrate after defeating the junior class, 24-8, during the annual Powder Puff football games on Nov. 17. (Photos by David Biggy)

Gianna Simon can deliver a sweet, upper corner goal from 20 yards with a soccer ball. Olivia Davis wields a mean field hockey stick. Leah Morrin can whack the stuffing out of a softball. And Jayla Hahn … well, she may be a little new to Southern Regional High School, but she simply can beat down a girl on a wrestling mat.

But on Nov. 17, these seniors’ athletic skills were put to a different test – more in the way of off-tackle running plays, busting through gaps in the offensive line for losses in the backfield, and booting extra points through the goal posts, as they took on the junior class in a friendly game of football. The Powder Puff games, more precisely.

“People joke about Powder Puff, but this is kind of serious stuff for us,” said Davis, the quarterback for the senior squad, which knocked off the juniors, 24-8. “We come out and play hard, and it’s really competitive. We only get three days of practice, but in that time we develop an offense, get a defense together and then show up to play.”

And the seniors didn’t just show up to play the main-event contest. Their warpaint looks were as fierce as their running attack. 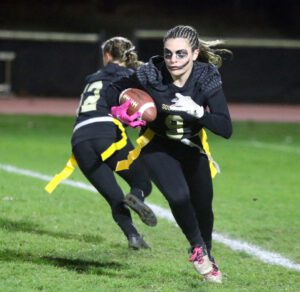 NO JOKE: Senior Gianna Simon eyes the first down marker after taking the handoff during a first-quarter drive.

“We weren’t losing tonight, because that would have been bad,” said Simon, who claimed she was going “for the Joker look,” but some could have mistaken her for a pale raccoon. “We definitely brought a winning attitude, in a fun sort of way. But the energy was really great. This is a lot of fun for us.”

For the seniors, it wasn’t too fun at the outset. After a scoreless first quarter, the juniors broke onto the scoreboard when Madelyn Beirne – one of the Rams’ high-profile golfers in the spring who just wrapped up the soccer season – took a handoff, bounced to the outside, and busted down the right sideline for a 42-yard touchdown. She then easily kicked the ball through the uprights for an additional two points, making it an 8-0 game just 16 seconds into the second quarter.

However, on their next possession, the seniors knotted the contest, going 60 yards and completing the scoring drive with a quarterback keeper, through which Davis ran the ball in from 2 yards away, followed by Simon’s two-point kick with 1:30 to go in the half.

In the second half, the juniors started on their own 25-yard line but were forced to punt, giving the ball to the seniors at their own 46. They marched down to the juniors’ 23 before Jenna Castaldo, best known for her soccer and basketball prowess, took a pitch from Davis, went around the right side and then zig-zagged through the heart of the defense for a TD. Simon’s PAT made it 16-8 with 2:39 left in the third.

From there, the seniors clamped down on defense, not giving the juniors much as they struggled to get to midfield. With time ticking down in the fourth, the seniors drove the final nail into the juniors’ coffin, when Simon took a handoff, streaked around the left end, weaved through a few defenders along the left sideline and took it to the house from 45 yards away. She added the PAT with 1:12 to go. 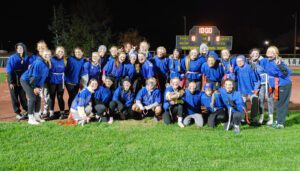 UP AND COMING: The sophomore crew celebrates its 22-8 victory over the freshmen during the annual Southern Regional Powder Puff football games on Nov. 17.

“We lost our freshman year and didn’t get the opportunity to play two years ago because of COVID,” Davis said. “Last year, we came back and tied the seniors, which was the first that had ever happened. And this year, we came in with a vengeance, that we had to get this one, and we did it in a big way.”

Not surprisingly, the other Simon sister, Brielle – who last year as a freshman matched Gianna’s two-touchdown output to help beat the sophomores – again was on fire, tallying three TDs to lead this year’s sophomores to a 22-8 victory over the freshmen in the undercard game of the evening.

“During our practices, we ran our plays a lot and did a ton of repetition to prepare our offense,” she said. “So tonight, our blockers did a really great job. They made the space for me to run through.”

The sophomore crew stopped the freshmen’s first drive near midfield, then methodically worked down the field to the 2-yard line, before Brielle Simon ran around the left end into the corner of the end zone for her first TD, then booted the PAT to make it 8-0 with 1:04 to go in the first.

The freshmen bounced right back, utilizing the athleticism of Molly Falletta – her brother was the quarterback for this year’s varsity football squad – to march down to the sophomores’ 8-yard line before she punched it into the end zone. Erynn McInerney, also a soccer player this fall, kicked the PAT to tie the game at 8-8 with 3:14 left in the half. 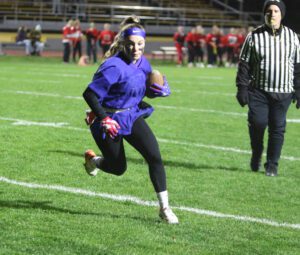 PAYDIRT: Brielle Simon blazes to the outside on the way to the end zone during the second quarter of the sophomores’ 22-8 win over the freshmen.

In the second half, the sophomores took over. Behind the running attack of Kayla Riley, Casey Collins and Kaycee Callanan, head coach Joe Nagy’s squad set up two more touchdown runs by Simon – the first from 45 yards out with just under six minutes left in the third, followed by a 20-yard scamper in the fourth quarter to all but seal the victory. Simon accounted for all the sophomores’ points.

The freshmen bunch tried to get back into the contest late in the fourth, advancing to the sophomores’ 10-yard line with more than two minutes to play, but ultimately were pushed backward during the next few plays and gave up the ball on downs at the 19.

Collins, who couldn’t play last year because the cross-country season was still going on, was happy to be a part of the action this year.

“I was really glad to be recruited by Coach (Brandon) Snyder, and my job was to find gaps and get my team into good field position,” she said. “We’re ready to go for another win next year and then make it four in a row.”

Nagy believes in his squad.

“The pressure might mount as they get older, but we’ve got the weapons,” he said. “These girls play well together. They enjoy being around each other. They’re into it right from the start of practice, and they want to win.”

Near me
40 miles
We use cookies to ensure that we give you the best experience on our website. If you continue to use this site we will assume that you are happy with it.Ok