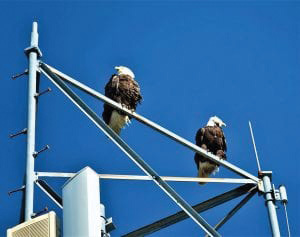 Wake up, rub eyes, go to window. They are not there yet, but I know they will be. “They” are the pair of bald eagles perching on the original TKR (Comcast) TV tower between 24th and 25th streets in Spray Beach.

The structure was erected in the mid-’60s. The monthly price for cable back then was $2.50! I forget how many channels we got. I have grown up in the shadow of this metal giant for most of my life. The exception is in 1973 when on an exceptionally windy day around March one of its three legs’ bolts was pulled out of the concrete. I remember because I happened to be watching TV (11 years old) and the screen went to static snow. My father ran in as I turned the dial on our TV, frantically trying to get back to the “Creature Double Feature” show. He exclaimed, “The tower just fell!” Sure enough, the familiar sight of the metal behemoth was gone, crumpled on the ground like a scene from the Hindenburg disaster.

Back to the eagles, the pair have been hanging around for a year or more now. There have been three eagles at times, maybe even four. It seems the female has two suitors that battle for her affection. A nest is yet to be seen. Possibly they are in search of an acceptable area that demands isolation, height and no interference from people. Also, recently an official from some environmental group has proclaimed they are “banded.” So, in keeping with the season, I thought I would delve into a Thanksgiving-oriented tale of turkey vs. bald eagle.

Both of theses birds have roots in colonial America, and it is said that Ben Franklin was rooting for the turkey to be our national symbol. Actually I learned that Ole Ben never wanted the scrumptious dinner entrée to be America’s symbol but recognized that the bald eagle was a scavenger and not very interested in fighting other birds. Although the bald eagle is an opportunistic feeder, its claim of cowardice by Ben Franklin is unsubstantiated. The large (up to 15 pounds) bird just ignores attacks by other nest- and territory-defending birds.

The turkey, by contrast, was an important part of the colonists’ diet, but was probably not at the original Thanksgiving meal. A description claims “fowl” was present at the original meal between the colonists and Native Americans. This was most likely duck, goose or some sort of pheasant and quail. The turkey is fairly difficult to catch and kill. It has a 270% field of vision (humans have 180%). The tasty critter has great hearing, can run 25 mph, fly 55 mph over short distances and can memorize almost a 1,000-acre area. The bald eagle, on the other hand, can fly 75 mph, has four times the vision of a human and can lift its own body weight. (“Honey, have you seen the cat?”)

Because of its non-scavenging importance to early settlers and “being a more respectable bird,” as our Philadelphian forefather put it, the turkey was given consideration to be our U.S. symbol. But in the end, on June 20, 1782, the bald eagle won out as our official logo. It has a long life (30 years), is majestic and was thought at that time to live only in North America. Now we know bald eagles live in Europe as well as from Mexico to Alaska, and in Hawaii and New Zealand. Oops.

So we end up feasting on Mr. Tom. But not always. Every year starting in 1863 a lucky turkey gets a pardon from the U.S. president. Abraham Lincoln was the first president to do this because his son Todd befriended a turkey that had been sent to the White House earlier that year. Honest Abe proclaimed the last Thursday in November be set aside as an official federal holiday to “give thanks and praise” to “our Lord in Heaven.” Yup, you atheists and agnostics who love turkey at the end of November are celebrating a semi-religious holiday.

Anyway, George Washington had celebrated Thanksgiving of a sort as early as 1789, but it was an on and off occasion until President Lincoln’s decree in 1863. By the way, what did Todd Lincoln name his pet turkey? Some of you are whispering it under your breath as you read this. Yes, “Tom The Turkey.”

But, not to be long-winded, I will end with the following. This Thanksgiving try to practice actual gratitude and generosity of spirit, especially if you know or see someone in desperate need of anything – a meal, a hand up, any type of positive gesture, even a hug. Try it. You might make someone’s day, and just possibly, maybe, you will smile later, knowing you have done a good deed.

How do I know all these facts? Google. Plus I am part eagle myself, Eagle scout, Troop 32 in Beach Haven, 1978. And I have been known to “talk some real turkey” in my time. Happy Thanksgiving!