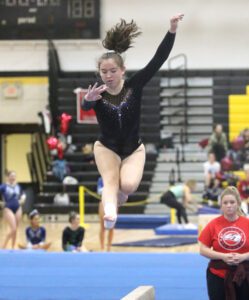 As a freshman last season, Southern Regional gymnast Francesca Verdi didn’t qualify for the NJSIAA Individual State Championships. A month after the season ended, she shattered her right ankle.

“At first, my surgeon said I wouldn’t be able to come back to gymnastics,” Verdi explained after the recent South Jersey sectional meet. “After the surgery, because it went so well, my surgeon said, ‘OK, you’re good to go back.’ So, of course, I did.”

Along with 39 others on Nov. 12 at Brick Memorial High School, the sophomore competed on the balance beam in the state finals, completing a remarkable comeback from an injury that could have ended her career.

“We had a very cohesive team this season, and all the girls were happy to be there and worked hard,” said coach Paige Peragine. “Frankie, especially, worked really hard to get back and, even though she competed (only) in certain events, had an awesome season. She really wants to be a good role model for the younger gymnasts.”

At the state finals, Verdi finished tied for 21st on the beam with Hunterdon Central’s Ava Sutphen, scoring an 8.975, just missing the top 20 by .075 – Cherokee’s Kaitlyn Cosper was 20th at 9.050. Freehold Township teammates Emily Rogers and Louanne Legregin tied for the top spot with matching scores of 9.575.

Verdi was one of four from Ocean County competing on the beam – Central’s Gianna Mastellone, who placed third in the state, Brick’s Liberty Kenney, who finished sixth, and Jackson’s Avelina During, who finished behind Verdi in 35th place. All competed against Verdi at the South Jersey meet, where she tied for fifth with Mastellone the week before.

“Now I can chug through the club season and come back next year with Level 9 skills,” Verdi said. “I’m looking forward to next year.”  —D.B.