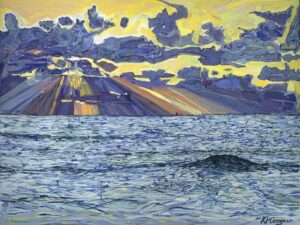 The structural, stylized oil paintings of Kevin P. Coogan, who splits his time between Barnegat Light and Wilmington, Del., bespeak refinement and a chunky, funky finesse, evoking a certain playfulness that starts as a tickle in the eye and lands as a longing in the heart.

His work is shown locally at Wildflowers Too in Barnegat Light.

The Wilmington native is a full-time veterinarian, having studied at the University of Pennsylvania School of Veterinary Medicine, and then Corcoran School of Art in Washington, D.C., though he did not complete the Master of Fine Art program there. Among his early teachers was oil painter Ed Loper, whom Coogan described as “a Delaware legend.”

“His style and philosophy of art has influenced me greatly over the years,” Coogan said.

He also considers himself a fan and student of the Barnes Foundation and its collection of Impressionist paintings. “In a nutshell,” according to Coogan, “the Barnes philosophy states that a painting can be viewed as a work of art in terms of line, light, color and space.” 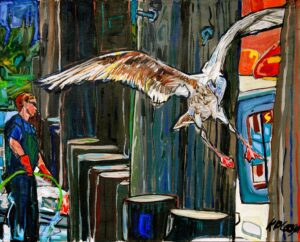 Another influential force for Coogan is the writings of John Dewey and in particular his book Art as Experience. In it, Dewey suggests a studied moment can become art, Coogan explained. “He believed ‘art’ should not be placed atop a pedestal created by a rarified group,” he said. Rather, art is open to anyone and enriches both artist and viewer.

The animal doc said he hits LBI every other week for a couple of days in the winter and commutes back and forth more regularly in the summer. He has home studios in both locations.

“I have visited LBI my whole life,” Coogan said. He and his wife, Amy, bought a house in Barnegat Light 20 years ago; their four children grew up visiting the idyllic north-end town, and now their first grandchild has joined them.

When in the double-oh-six, Coogan is inspired by many sights and sensations, primarily the ocean, and enjoys painting en plein air – a mindfulness practice, he said.

“I like painting in the moment,” he said. While a painted image may be static, he continued, “the heat of the sun, the cool of the ocean breeze, the sounds of the gulls and the smell of the bay are dynamic and part of the creative process.” The painting reflects the fullness and weight of a fleeting instant: a wave breaking, the sun rising.

Always, the Atlantic calls to him. “I have swum in it, boated on it, fished from it and surfed waves with it,” he said. “Like anyone, I have sat and stared at it for days. I have walked by it any time of day or night. I have always felt a force from it. Over the last few years, I have focused on composing paintings from multiple ocean images I have photographed.” 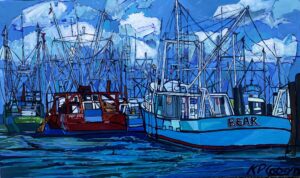 Fishing boats, which he described as “line, light, color, space and movement in a glance,” are another favorite subject of Coogan’s.

Often, his finished works are self-reflections. More than just “tapping into a flow,” he said, artistic creation is a fusion of work, mental state and lived experience.

“My ocean paintings are internal landscapes of my emotions and experiences,” he confessed. “A finite moment is ephemeral, and, as many philosophers have said, in the ephemeral, there is infinity. The complexity and ramifications can be powerful.”

As a practicing veterinarian for over 40 years, imparting sad news about a pet’s prognosis comes with the territory. 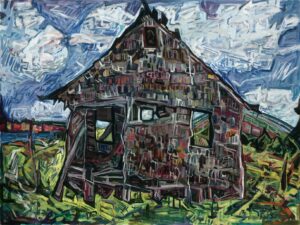 “I am the doctor who diagnoses and recommends a course of action,” he said. “I am also the doctor whose job it is to end a life humanely. Sometimes multiple times a day, I announce a heart has stopped and a life has ended. I am witness to that one moment when a life ends, and mourning begins.”

As he ages, ponderances about death begin to creep into his work.

“I have had days where I am overwhelmed by the intensity of my job. Painting is meditative and therapeutic as I bear witness to mortality.”

Coogan likes to paint large canvases for the power they hold. Currently he is working on more fishing boat paintings. He derives satisfaction, he said, both from illustrative exploration and from “finding the abstract in reality and conveying that.”

He added he deeply appreciates his alliance with Wildflowers’ Cricket Luker and Maggie Roedema and their investment in the Island’s artistic expression. 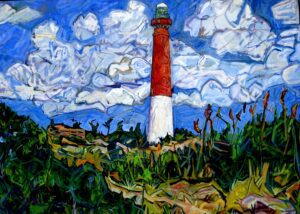 ‘Barnegat Light’ is the way the artist saw the lighthouse in 2010.

Coogan participates in a couple of art shows each year and hopes to do the Open Studio Tour next year. He also displays and sells his work in a Wilmington gallery called Blue Streak, but he has had more success in sales at the Jersey Shore, so he has concentrated his efforts on LBI.

“On a basic level, people just comment on the colors in my paintings. It’s an incredible validation when someone buys a painting. I am flattered when the purchase is based in nothing more than ‘It will look good over the sofa.’ That is how it should be,” he said.