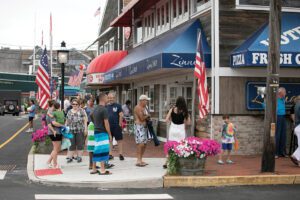 SUMMER SUCCESS: Summer brought vacationers and new homeowners to the whole county, regardless of staffing, as evidenced by this happy crowd enjoying Bay Village and Schooner’s Wharf in Beach Haven. (Photo by Jack Reynolds)

What summer 2022 had going for it: great weather, clean water and a flow of vacationers to white sand that was relievedly a tank of gas away from many major East Coast cities, noted Ocean County Commissioner Joseph H. Vicari. As fall festivals are now the draw, the calendar offers more than one celebration every weekend, Vicari pointed out.

“Tourism generates approximately $6 billion a year in Ocean County. Every dollar spent in the county circulates at least seven times,” Vicari said. “Almost 98% of our businesses are small businesses, and they depend on the tourism season to prosper.”

This summer, rentals were strong with an online booking company reporting “record” website hits. And Surflight Theatre in Beach Haven posted a continued rebound to numbers of visitors who attended prior to the previous two years of pandemic challenges.

What could have been better: Many business owners had to work to keep a full staff, not a new situation, but one that has presented continued challenges.

For this business update, we asked the treasurer on the board of directors for the Long Beach Island Chamber of Commerce, Dan Malay, for an overview of what he observed. His conclusion: “A strong summer for sure. In terms of business volume, probably the strongest ever.”

And then comes the caveat. “The main challenge, though, is the shrinking labor market, which forced a significant number of businesses to cut back on their hours and season, leaving a lot of unrealized revenue on the table, and shortened the season of businesses providing service to our visitors,” Malay continued. He was speaking Islandwide more than of the coffee shop/cafe he co-owns in Surf City, which took added staffing measures to keep a number of employees year ’round, among other measures.

“It is critical that this challenge is tackled, because it threatens the viability of the seasons moving forward,”Malay said. “This is also why it is crucial that towns get serious about preserving commercial property. For every business that is torn down to build a house, it is more pressure on the existing businesses to execute in meeting the increased demand for services. If that pendulum swings too far, then we run the risk of dollars spent going westbound over the bridge, or elsewhere altogether from our area.”

Surflight Theatre Producing Artistic Director Steve Steiner is also chair of the Ocean County Tourism and Business Advisory Council. When we talked to him recently, not all figures had been analyzed countywide, but he had an upward trend to report on the theater as it was past the height of COVID’s effect on indoor gatherings.

“The advisory council will probably get the data and figures out a little later; the next meeting is the second week of October,” Steiner said. “Chances are we’ll get a much better idea of what the summer was like – almost all of them (council members) operated tourism-related businesses.”

As for Surflight, he said, “We are hopeful that next year we’re going to be closer to 100% of a normal year, but we knew it was going to take a little while for people to get used to the idea of attending indoor performances seated next to people you don’t know. Theaters all over the country are experiencing that.” He added that the Surflight’s experience is probably ahead of others, because the venue produced shows outdoors during COVID’s first season. Incidentally, signs this summer indoors as COVID had waned told audiences that the theater did not require masks but encouraged strongly that they could wear one if they felt more comfortable, Steiner said.

“We were really right about our guesses,” Steiner said, after studying national and international trends about when people were going to be ready to come back to assembling publicly to watch performing arts. “In 2020 with the tent in the park, we were at 20% of a normal year. We were guessing that in 2021 we would be at about 50% and that’s where we were. This year we budgeted for 75% and it looks like that’s where it will come in,” Steiner said in September.

Inflation, another unavoidable event facing businesses, “certainly has affected our cost of doing things,” Steiner said, “both at the ice cream parlor (The Show Place, adjacent to the theater) and at the theater. Yet the ticketholder didn’t feel it.

“But we have not yet done a price increase at the theater,” Steiner continued. “That’s probably going to have to happen next year, but we have tried to do that every three years rather than annually. We really wanted to let the community know that we were here as a resource as opposed to trying to gouge them. And the theater is a nonprofit organization, and we look at things a little differently.

“We went from $39 to $41 three years ago, an increase of about 5%. It would also be 5% if we go up next year another $2. We really want to keep the quality up, and we want to keep it accessible to everybody. We try really hard to improve to the point where more and more people want to come and attend. And if they do, we don’t have to take the price up.”

Asked whether the influx of new homeowners had yet provided new patrons to the theater, the answer was that there is more potential for the future.

“My wife does our social media and she’s involved with various groups of people that are specific interest groups on LBI, and she is constantly seeing people who have no idea that we’re here.” Social media is “very helpful” to reach out to new attendees, he said.

As a wide snapshot of rental demand, a positive report came from VRLBI (Vacation Rentals LBI), an online vacation rental platform that works with many real estate agencies as well as private homeowners.

Duane Watlington, owner/founder of Vacation Rentals Jersey Shore LLC that produces the listing websites, said VRLBI saw “a record August as far as website traffic” and “more people were searching this year than ever.” The count of website visits was up to 300,000 per month in the high season, searching as many as 1,600 listings.

“We had a really good summer season. I would say just about everything was rented.”

If there was one segment that “struggled,” it was the “big, really expensive properties” at the top of the price list that sleep 25 people, he said. Now with COVID having waned, the wealthiest individuals have the option of returning to European vacations or sailing the Caribbean. However, “the bread and butter, the four- and five-bedroom rentals, filled up this summer” and did well in September, Watlington said.

The lower priced rentals “always do well,” he added. “In September, the smaller the rental, the better. Most of the people coming down are retirees and empty nesters.”

The preseason of April was “strong,” Watlington reported, but “not as solid as it was in 2021, which was off the charts” as during the pandemic, LBI became a mecca of fresh air.

On that note, Watlington observed, “I believe we are coming out of what I called the COVID bump. So many could work from home, so many were schooling remotely, it extended our season to as early as March and as late as November.

“I think we’re in transition to a normal rental market, back to 2019 market conditions.” However, because a lot of people missed out the last couple of years if they tried to book too late, now a lot of renters will book earlier.

“Owners that are willing to take reservations now for next year are doing really well,” he said.