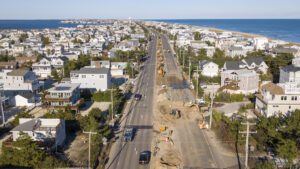 Contractor Mathis Construction is estimating the end of April 2023 as the finish date for a sewer main project in North Beach, Long Beach Township officials said this week. The work, which began in February of this year, includes the removal and replacement of a main sanitary sewer pipe as well as the installation of all new laterals, which go to the private easements and paved streets in that section of the municipality.

“That’s a big project, no doubt about it,” remarked LBT Commissioner Ralph Bayard. The existing pipe was in bad condition, and required regular emergent work; a new main was very much needed, the commissioner noted.

After the first few months of work this year, Mathis, based in Little Egg Harbor, wrapped up in mid-June, and then returned on Sept. 12. “We don’t let anybody work from around June to September,” Long Beach Island’s busy months, Bayard pointed out. Once the weather warms, LBI’s vehicle and pedestrian traffic increases significantly, making work along the roadways unsafe and inconvenient.

Township Superintendent of Water and Sewer Mike Clark said the contractor even got permission from the mayors of the Island’s northern towns to stay on a little longer in June before wrapping up for the summer season.

While supply chain issues haven’t affected the project, Clark explained, some extra time has been apportioned to working around other utility mains in the ground, such as gas and electric, with ground-penetrating radar (GPR) utilized to identify all subsurface elements.

As Bayard noted, the timing of the project’s conclusion is, as always, dependent on the weather through the winter months.  —J.K.-H.