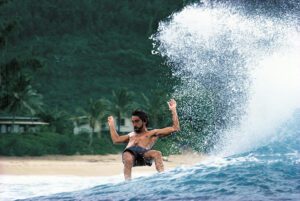 HANG ZEN!: LIFS will screen ‘The Yin & Yang of Gerry Lopez,’ a documentary on one of the most radical, yet zen, surfers of all time. (Photo: Jeff Divine)

Produced by the Patagonia clothing company, directed by Stacy Peralta and written by Mark Monroe, the 103-minute documentary lifts the veil on one of surfing’s most enigmatic heroes.

“While ‘Mr. Pipeline’ is famously known for his calm demeanor in the tube, Gerry build his career with aggressive surfing that left behind a trail of blood and tears,” reads a LIFS publicity blurb. “Gerry is as radical as he is Zen; he transcends categorization. He’s one of the most influential surfers and surfboard shapers of all time, an entrepreneur, a family man, a movie star and a lifelong yogi who brought surfing to new frontiers. His influence on modern surfing is immeasurable, and for the first time, his story is being told in full. Thank you to our sponsor South-End Surf ’N Paddle.”

Tickets are $10 online at lighthouseff.com or $12 at the door. However, advance purchase is strongly encouraged as seating is limited. And it is requested that viewers arrive 15 minutes before the show.