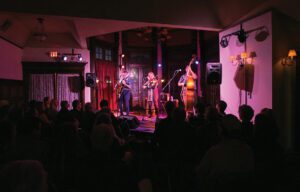 Rain drops tapped out an insistent rhythm, beating against the tall windows of the Lizzie Rose Music Room while an eager crowd gathered inside, anticipating the long-awaited reopening of the unique venue.

While the late-October weather reminded everyone that we were truly in New Jersey, inside, the Hot Club of Cowtown – playing an infectious concoction of Western swing and hot jazz – transported the audience to its own imaginary Cowtown, located somewhere between the dusty West Texas plains and the jazz clubs of Europe.

The Hot Club of Cowtown brought its act to Tuckerton on the last stop of its 25th anniversary tour, a tour that had taken the group through the Northeast from Virginia to Pennsylvania, Massachusetts, Connecticut and New York over the past two weeks. The band – singer and violinist Elana James, singer and guitarist Whit Smith and bassist and singer Zach Sapunor – played with its unique combination of musical technique and infectious joy.

“It’s the longest U.S. tour we’ve done in two years,” James said. “It feels good to be out among people, to be back out among our people. Our Northeast following has supported us for over two decades.”

Indeed, a quick survey of the house revealed nearly half of Sunday’s crowd was at the Lizzie Rose for the first time. Based on their familiarity with the band’s repertoire, those were the people James referred to. 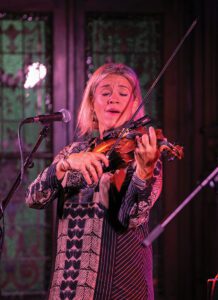 The venue, too, celebrated a milestone of sorts. Due to limitations imposed during the pandemic, concerts had been held elsewhere over the past two years, outside to encourage attendance. But those changes, combined with a decrease in the number of concert goers, resulted in fiscal distress for the nonprofit, forcing the organization to establish a GoFundMe effort to raise revenue to continue operations.

Sunday night’s concert marked the first to return to the inside venue since the beginning of the pandemic. “Tonight’s concert is our first since March 2020, so it’s a very special night for us,” Reichert said.

Reichert acknowledged the hosts of volunteers who allow the Lizzie Rose to function, bringing those who were working Sunday night up to the stage before the show started for a well-deserved round of applause and a commemorating photo. Reichert also recognized the generous donation from Tuckerton Lumber that allowed the nonprofit to rebuild the stage in the listening room.

“Our GoFundMe met our goal of $8,000,” he said, which prompted another round of applause. “That has allowed us to replace the stage, the sound booth, things that we had to abandon. But as a nonprofit, our ongoing responsibility is fundraising.” 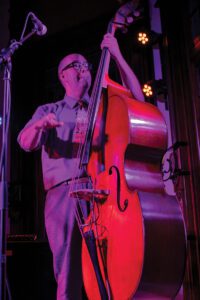 After the proverbial hat had been passed, the band took to the stage and launched into a rip-roaring set. The Hot Club of Cowtown alchemizes Western swing (think Bob Wills and his Texas Playboys) and hot jazz (think the stylings of jazz guitarist Django Reinhardt, who, with violinist Stephane Grapelli, formed the Quintette du Hot Club du France), combining American songbook standards such as “When Autumn Leaves Start to Fall” and “Pennies From Heaven” with cowboy songs such as “Hoedown Lowdown” and “Old Cowhand from the Rio Grande.”

However, the band is no one-trick pony. The technical virtuosity of the players ensures their act surpasses mere gimmick. James’ unique biography exemplifies the band’s eclecticism: born and raised in Kansas; classically trained on violin and viola at the Manhattan School of Music; graduated cum laude from Barnard College; a featured guest on Prairie Home Companion and Grand Ole Opry and performer at Lincoln Center. She recorded or toured with Bob Dylan, Willie Nelson and Merle Haggard, among others, and is a veteran horse wrangler. Eclectic. Her breathy vocals combine with a wink and a knowing smile to deliver lyrics with the intimacy of a lover’s pillow-talk purr.

Smith’s guitar playing alternates between jazz chord inversions and delicate melody lines, at times mirroring James’ violin lines. His pleasant baritone serves him well with a cowboy’s good nature. Sapunor’s percussive upright bass makes him the most entertaining bass player this side of the Pecos, sometimes slapping the strings against the fingerboard, sometimes slapping the body of the instrument in syncopation. 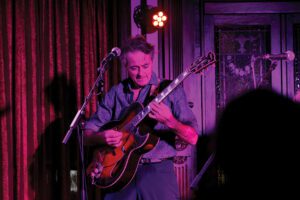 James and Smith met in the ’90s when the latter answered the former’s ad in the Village Voice, looking to join a band. After forming a larger swing orchestra, they eventually realized less can be more and boiled the sound down to a trio. Other bass players have come and gone; Sapunor joined the Austin-based trio in the summer of 2020.

Of the style of music they play, James said, “Western swing has the best of everything. It has beautiful melodies, but it can also be very virtuostic. There’s no limit to what you can do with the songs. Obviously, some songs don’t call for crazy soloing, but some of the songs can. Plus, it can be irrepressible. It’s got this happy, swinging aspect.”

Covers and standards weren’t the only offerings from the band.

“We are going to play some songs we wrote; otherwise, no one will ever hear them,” James quipped.

“Reunion” chronicled James’ complicated emotions from attending her high school reunion; “Near Mrs” is a comic (albeit sometimes darkly so) litany of failed romances.

Describing the band’s longevity, James mused, “The band is kind of like a little ship that sails the world. You can’t do Western swing alone; it’s like a formula that involves other people. It is remarkable.”

Remaining with a musical partner as she has with guitarist Smith for all these years has been notable, too. “We both have a respect for where the music came from, having gotten to play a lot of it with first-generation players themselves. I think both Whit and I have the understanding that it’s fine to do your own thing, but first understanding the genre you want to make your own. Once you can play by the rules and understand it, sure – do whatever innovations you want. A lot of people bypass the tradition and wing it. I have a lot of respect for Whit’s respect for the tradition.”

For upcoming shows at the Lizzie Rose Music Room or to support its ingoing fundraising efforts, visit lizzierosemusic.com. To follow the Hot Club of Cowtown before the band passes this way again, go to hotclubofcowtown.com.