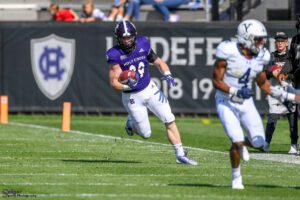 At this time of year, college football coverage focuses heavily on which will be the four teams in the College Football Playoff, with all eyes on the fates of Georgia, Ohio State and Michigan among the elites.

But in the NCAA Division 1 Football Championship subdivision, it’s a whole different matter, with 24 teams from colleges all over the country competing in a playoff system.

The No. 8 seed is Holy Cross College, whose starting tight end is Sean Morris, the former Barnegat High School standout. The Massachusetts school went undefeated at 11-0 for the first time since 1991, and won its Patriot League conference.

“The mood was still very upbeat despite the loss,” said Morris, who scored on a 7-yard touchdown reception against Villanova. “The feeling was is that we would come back strong, since most of the key players were coming back, and we did.”

Their seeding resulted in the Crusaders getting a bye this weekend, and they will play the winner of the first-round game between Fordham and the University of New Hampshire on Saturday, Dec. 3 on their home field. It would be an intriguing rematch if Fordham won, as Holy Cross defeated the Bronx-based Rams, 53-52, in overtime in October.

Last year marked his first fall campaign. A shoulder injury sidelined him as a freshman in 2019. The 2020 season was scuttled due to the pandemic, and it resumed in the spring of 2021 with only a three-game schedule. They still won their conference but lost in the opening round to South Dakota State.

Morris said that because of the disrupted 2020 COVID season, the NCAA granted players an extra year of eligibility, so he could return next year for fifth season.

“I don’t know what I’m going to do yet,” he said. “I’ll take some time after the season to think it over.” Morris is an accounting major and after graduation looks to become a certified public accountant.

At Barnegat, Morris earned honorable mention all-state honors as a junior. He was named first team All-Shore Conference in 2017 and was also a two-time All-B South Division selection. He reached a college milestone last year by making the all-Patriot League second team.

Morris also has good bloodlines. His older brothers, Ryan and Kyle, were also tight ends for the Bengals and played collegiate ball. Ryan graduated in 2012, and initially enrolled at Purdue University but later transferred and finished his football career at Villanova. Kyle graduated in 2015 and played at Johns Hopkins University.

“They are great examples for me to follow,” Morris said. “We frequently stay in touch. I am thankful that I have a very supportive family. They’re usually at my games.”  —E.E