Enjoy Turtle Island/Hah-nu-nah Summer; Surfcaster Uprising May Be on Horizon 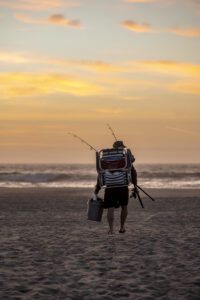 LABORING FORTH: It’s all in a day’s non-work. While playing hooky to grab a great fall fishing day used to entail plenty of over-the-phone moans and groans, many work-from-home folks can now hit the beach theatrics-free. (Photo by Ryan Morrill)

It’s November times like these – I took a 79-degree temp reading in the woods on Sunday – that visions of mistletoe begin dancing in our heads. Just kidding. Hell, there are still a whopping 40-some shopping days left until Christmas.

What first dances to mind within mid-fall warmth is the age-worn concept of Indian Summer, though that now flushes out the multihued bird of political correctness. Indeed, the eons-old term reveals a quiet bias. The peoples we call Indians were dubbed so through incredible misreads by explorers crossing the Atlantic in hope of seeing the “Great Wall of India.” Yes, early explorers pretty much had it all wrong.

To be politically true to the truest forefathers of this land, warm autumnal air masses should be based on the name given the land by its first inhabitants: Turtle Island.

Our indigenous forefounders believed that now-North America was built by very energetic muskrats who swam down to the ocean bottom, brought material back to the surface, and placed it on the back of a passing turtle. They called the continent Hah-nu-nah. So, it’s settled. You can now sit back, sipping outdoor coffee at How You Brewin, and luxuriate in a Turtle Island/Hah-nu-nah Summer.

Surely, I moderately jest. However, did you know there is already a variety pack of names when it comes to what I’ll backtrackedly call Indian Summer? Among bandied-about names are Second Summer (American Meteorological Society), Old Wives’ Summer, St. Martin’s summer, St. Luke’s summer and Halcyon Days. Even Billy Shakespeare got in on the name-that-warmth fun. In “Henry IV,” Part 1, the bard called it “All Halloween Summer.”

The first recorded use of the phrase “Indian Summer” appears with “Letters From an American Farmer,” written by a Frenchman called John de Crevecoeur, dated Jan. 7, 1778. In his description of life in Mohawk country, he writes, “Sometimes the rain is followed by an interval of calm and warm which is called the Indian summer.”

For variety, J.M. Flowers of Carpentersville, Ill. provided the following interesting explanation that predates 1778. He writes, “My wife and I were vacationing in Scotland and we overheard a Scot mention Indian Summer. I asked how the term started in Scotland. He said it had to do with sending British troops to India in the late fall. The weather was still warm in India – thus the term ‘Indian Summer.’”

FREEZE A MUST: In practical application, Indian Second Oldwives St.Martin St.Luke Halycon Halloween Turtle Island Hah-nu-nah Summer is attached to any late pooling of warm air that arrives in fall. But, for certain sticklers, a prime precursor must first be met. They claim  there cannot be a true and proven Indian (et al.) Summer until there is first a “deep freeze” night, one that is quite cold, not just some morning ice crystals on the eelgrass. “It occurs after at least one good killing frost but also before first snowfall; preferably a substantial period of normally cool weather must precede this warm spell,” dictates almanac.com.

This coming weekend might see near ice-on-the-pumpkin conditions. After that, if we rebound back to short-sleevedness, we can commence to calling it any of the above-mentioned summers.

SEALS COME HOME TO ROOST: Great Bay and the Mullica Estuary apparently pass the seal test – seal of approval is too corny. The most recent – though becoming outdated – counts show winter pinniped pullouts (rest stops) thereabouts are going up. So-called “maximum local abundance” had increased from 100 individuals in 1996 to 160 individuals in 2011. Down Holgate way, we see quite a headload of them passing through Little Egg Inlet, a prime ingress point to Great Bay.

Geographically/technically speaking, the Great Bay area currently represents the southern limit of routine Western Atlantic harbor seal occupancy in the Northeast. Its track record for attracting overwintering pinnipeds has made it a prime site for official pinniped data collecting this winter.

A current seal study, mentioned in an NJDEP report, is being done in hopes of updating seal counts to allow proper management, to ensure human impacts on marine mammal populations are “sustainable.”

Yes, that term raises porcupine-grade quills among seal supporters, who instantly envision the cruelest clubbings known to man. Closer to modernity, the term also reflects the monitoring of all attrition, including that related to commercial fishing bycatch, strikes from vessels and threats from environmental hazards. A directive for the current research is to anticipate future impacts resulting from climate change.

The Great Bay/Mullica seal presence is of utmost import in gauging the southerly range and overall health of the entire biomass. Population increases could be an indicator of overall biomass success to the north – home to the “motherload” of pinnipeds, both summer and winter.

Great Bay presently rates as the greatest winter seal location south of Long Island, with Sandy Hook and Barnegat Inlet not too shabby in the eyes of southwardly exploring seals.

It’s within the past data collected from Great Bay that I detected an intriguing fishery fact – compliments of 142 scat samples taken from pullout/resting areas. Spotted hake and red hake comprise well over half of seals’ caloric intakes. It indicates there are loads of small hake in the winter system, possibly up the Mullica River a short way. Slow-moving hake are sitting ducks for seals.

The diet of our overwintering seals is rounded out by bunker, sand eels, assorted herring, winter flounder and sundry crustaceans.

Sidebar: Many kayaking years ago, I would paddle out into (calm) ocean waters off Brant Beach on seriously cold winter days. Fishing light gear, kingfish type light, I’d regularly score a slew of hake just beyond the sand bars. I used small hooks and pieces of sandworms I’d dig myself. Be it the novelty of icy midwinter fishing or a lack of freshly caught fish to eat, I recall they were an ambrosia-grade delicious, offering a soft white meat. Downsides were their smallness (12-inch-ish) and eel-like sliminess.

WELCOME ABOARD, MADAMES AND MADEMOISELLES: The latest fishing industry statistics are tellingly upbeat.

But onward to the delightfully sexist side of things. Not to worry, ye of a formidable female persuasion. I’m respectfully alluding to the way women have rocketed into the angling realm, now accounting for 37% of all anglers in the U.S.

To prove they’re coming on like gangbusters, of the 3.7 million first-time angling participants in 2021, 43% (1.6 million) were of the fairer sex.

Hold up. Can I even use that “fairer sex” expression? I’ll check.

Whew! At least one site, economictimes.indiatimes.com/ writes, “Recent research in the US rightly corroborates that women are, indeed, the fairer sex. Women outnumbered men on prioritizing fairness, purity (of intention, that is) and compassion when it came to taking ethical decisions. And it means the phrase ‘the fair sex’ is obviously a statement of fact, not condescension or bias.”

Cool. Hopefully I’m still in good stead with the fairers. I can’t afford to alienate what might soon be the majority of anglers.

Just wondering: When women buy fishing boats, do they name them after men?

WEAKIES PAY THE PRICE: As we rightfully delight in the fine showing of highly conserved striped bass, it is merely due diligence on our angling parts to ponder, if only passively, the plight of weakfish – and to nobly admit that this species is paying the price of our bass love.

Do not get me wrong. Stripers are so popular, deemed utterly iconic, they must be allowed to endure. By popular untaken vote, weakfish are merely also-swams, despite once having offered exceptional angling fun with some dining pleasure mixed in.

The overfishing of weakies first mangled the stocks, knocking their numbers down to the current last-gasp level. So, why associate the current bass conservation with weakfish ruin?

One need only reference findings indicating the diminished weakfish population is now taking the brunt of the bass mass. This has been proven in the most definitive study of weakies, a lengthily titled report, “An integrated tagging and catch-curve model reveals high and seasonally-varying natural mortality for a fish population at low stock biomass.”

While I paid to read the entire study, its free abstract states, “Our seasonal analyses showed that a large portion of (weakfish) mortality occurred from fall to spring, coinciding with weakfish migration and overwintering periods on the continental shelf. Through an integrated modeling approach, our study provides insights into the magnitude, timing, and sources of weakfish mortality, and enhances understanding of weakfish population dynamics to guide management strategies.”

Things get a tad sticky for sportsmen when mortality specificity steps in. “Striped bass and dolphin” are singled out, almost exclusively, as the ravenous root of natural morbidity.

But I’m not going where you might suspect. While it is ongoingly proven that babying one species can lead to others being thrown out with the bath/bass water, I’ve come to accept that a democratic and conscientious choice has been made that we as an angling whole simply prefer bass over weakies. It’s a “People have spoken” thing. An ethical problem arises when we refuse to openly admit our choice.

And what good would it do to accept responsibility for weakfish woes? It might actually aid and abet the heightened – and further heightening of – striped bass conservation by lessening the need to duly consider holistic fishery conservation.

Long live stripers – may we not someday get bored with catching just them.

RUNDOWN: One word covers all catching of late: stripers. If you’re wanting to add another word: big stripers. Boat fishermen have hauled in eye-openers at an amazing catch-and-release clip. It has become a fall-time fishing slam dunk. It’s that certain, to the degree it’s the most powerful gamefishery of the year, acknowledging fluke are competitive, but not nearly to the same battling gamefish degree.

There are also bass as surfside attractions. They’re making their own striper stir, showing in “derby” dimensions, referring to the days when big-ass bass could be kept and weighed into the annual fall surf fishing extravaganza.

I’ll daringly suggest the 2022 LBI Surf Fishing Classic might have rated among the best ever for mongo striper weigh-ins, even taking in the contest’s entire historic run. I’ll enumerate by guessing a dozen or more fish over 35 pounds would have been entered – with a 50 or two going head-to-head. I base this on the known caught-and-released suds stripers taken to date.

But, Jay, it’s bass blasphemy to even ponder such anti-striper mayhem!

Forgive me, for I have bassedly sinned. But since I’m on a roll, I’ll go whole hog/cow by praying to surfcasting gods that we, as surf fishermen, may someday be exclusively allowed to keep a trophy fish – maybe only between October and December.

Allowing surfcasters to keep a well-regulated single daily fish of at least 40 inches would, firstly,  represent little more than a drop in the bass biomass bucket since it would be far less attrition than the post-release mortality associated with all forms of bassing. Secondly, such insightful managerial allowances would breathe life back into the surf fishing tournament realm.

If it sounds like I’m rallying to get mobile fishermen and surfcasters to unite, so be it – and overdue.