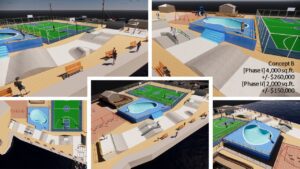 COMMUNITY CHOICE: This design proposal presented to Beach Haven Borough Council was the most popular among attendees at August meeting. (Art by Pillar)

By next summer, Beach Haven hopes to open a skate park at the Taylor Avenue bayside waterfront. The proposal moved another step closer to reality on Nov. 14 when the borough council adopted a bond ordinance to appropriate $325,000 for the facility, which would be located west of the basketball court.

To help the process along, borough officials earlier this year hired Brad Siedlecki as a consultant. He is president of Pillar Design Studios/Pillar Skateparks, based in Arizona. At a presentation in August, Siedlecki presented several design proposals, and the one known as “Concept B” appeared the most favored among the people in attendance.

Siedlecki said that concept would combine what are known as “street” and “transitional” skate park features. He said street skateboarding is skating outside the confines of a skate park, or obstacles such as handrails, ledges, stairs and banks. Transition features mini ramps, quarter pipes, bowls or other obstacles that are not found in street skateboarding.

Mayor Colleen Lambert voted against the ordinance, saying there are “too many unknowns” and “that there is a lot of money being spent for things we need.”

“I’m not comfortable with it,” she said.

Councilman Dan Allen, who said he has been advocating for a skate park since assuming office in 2019, said the borough may face minimal costs.

“We’re probably going to do some fundraising to try to reduce our cost as much as possible,” said Allen. “Then we will have to approve a design and go out to bid.”

The councilman said he hoped a contract could be drawn up by the end of the year, and that ground could be broken in the winter.

During a public hearing on the ordinance, Councilwoman-elect Catherine Snyder said she would “not vote for it if we pay for it.”

“I don’t have anything against the idea of a skate park,” she said. “But I think there could be safety issues. It will be located in an area where a lot of kids hang out at night.”

Resident John Hailperin said the money for the skate park was originally going to pay for two trolleys for summer transport.

“The trolleys had the support of the business community, but that is no longer in play, so we need greater transparency about the need for this project,” he said.

“The skate park design concepts have not been agreed to yet. I’m also concerned about possible flooding problems.” —E.E.