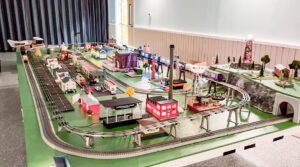 ALL ABOARD: This colorful model train exhibit will be up and running through Christmas Eve at the Barnegat Township Recreation Center. (Supplied Photo)

Two Barnegat Township residents who are officials in the Barnegat-Waretown Little League as well as model train enthusiasts are putting their hobby to good use for the organization.

Justin Deemer and Mike Polito are running a holiday model train exhibit at the Barnegat Recreation Center, located in the municipal complex on West Bay Avenue. The display will be running on Tuesdays, Fridays and Saturdays through Christmas Eve, Dec. 24. Hours on Tuesdays and Fridays will be 5:30 to 7:30 p.m. and Saturday, 9:30 a.m. to 12:30 p.m. Admission is free; donations to the league are appreciated.

Deemer, who is league vice president, said the layout is 16 feet by 18 feet.

“I have Lionel trains, while Mike has HO scale trains, which are smaller,” he said.

“Between trains and accessories, we have about 40 pieces,” he said. “The display is not holiday themed, although there could be Christmas trees in the scenery.”

Deemer said a special part of the display is interactive features, which he said will have a special appeal to children.

“We’ve got 10 buttons they can press,” he said. “One might activate some lights, and another will show a lumberjack working. This is going to be a great family fun event, and we hope we can make this an annual tradition.”

Polito, who is on the board of directors and is vice president in charge of field operations, said he has been involved with model trains all his life.

“My grandfather and father all had model train displays for the holidays, so I’m just continuing a family tradition,” he said. “The HO trains are on a 1 to 87 scale, meaning 1 inch on the model equals 87 inches on the real train.”

Deemer said all proceeds will go to fund league operations. He said last year, the league had more than 300 participants covering ages 4 to 14. The youngest kids play in T-ball while the oldest are in the Juniors.

“We have 25 teams, so our turnouts have really been good,” he said. “We’re looking ahead to another successful season in 2023.”